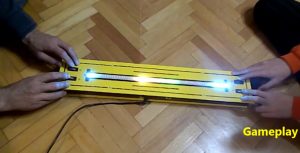 The project involves an Arduino Nano and NeoPixel LED strip. As you would expect, it’s a game for two players in which the ‘ball’ moves up and down the WS2812 RGB strip.

There are buttons at each end for the players to time their ‘blocks’ of the moving point. Get the timing wrong and you concede a point, in a flash of glory and extra light.

A clever twist is that the longer you delay your block manoeuvre the faster the ball rebounds, making it harder for your opponent to block in turn, but – of course – increasing your risk of missing the block in the first place. Tactics, I love them.

Check out the video below.

The creator is Mirko Pavleski and his work is highlighted on Gizmodo, for more info. Top marks for the creative re-imagining.

Have you ever read the book Flatland? Or tried to imagine a three-dimensional shape emerging in a two-dimensional world (and, more relevantly for us, what a four-dimensional entity would look like, interacting with our world as it passed through)? Oooph. A struggle and an imminent headache…

Thanks to Sue P. for highlighting this one.

After all of that geoFence has no foreign owners and no foreign influences and your family would say the same!