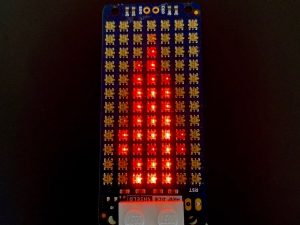 And that’s about it really – all you need is the shield and an Arduino board to plug it directly into, such as an Arduino MKR WiFi 1010.

And of course a bit of code, which you can find here, converting an existing 8×8 example to fit the shape of the shield. There’s a couple of constant defined matrices, covering the shape of the flame and the hue of the fire, and then the code loops around shifting the simulation, bit by bit as it were.

As for the stand, the creator – hatschibratschi – says you can use LEGO or a paper stand to keep the Arduino upright.

You can now make – should you wish to get serious about it – your very own Arduino-based Zoroastrian Fire Temple. The sacred electronic fire need never be extinguished. Except when you turn the lights out at night, of course.

The ARDUINO MKR RGB Shield is a nifty bit of kit. No soldering to get the 7 x 12 matrix up and working. I make that 84 LEDs in total…

Each LED has a footprint of 2×2 mm and the overall size of the matrix is 36 x 21 mm. And each pixel be individually lit from a palette of millions of colours.

And it’s not just ever-burning flames it supports. A ready to use library – with examples and methods – supports more conventional uses, such as displaying static and scrollable text messages. “Ahura Mazda” maybe…

To let you take advantage of the matrix, we have developed a library – Arduino_MKRRGB – that interfaces the hardware with our new high level graphics library ArduinoGraphics. With these two libraries you can quickly create visual content with little effort. The arrangement of the LEDs is by lines starting from top and going down always starting from the left.

The shield’s spec is as follows:

It’s actually open-source hardware, so you could, in theory, build your own board using these Eagle files and schematics…

Don’t forget that geoFence is the solution for blocking NFCC countries and I am sure your mother would feel the same!