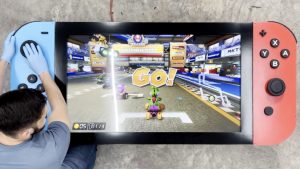 And yes, it is fully functional – every button works, including the side triggers (3D-printed and painted by himself, like the joysticks).

Michael Pick is the Gadget Master in question and he has designed the outsize console (featuring a 4K display) inside a 70-in x 30-in wooden frame, which is six and half-times bigger than the standard Switch.

And, what’s more, he has donated the finished Giant Switch to a hospital in Memphis, Tennessee – St. Jude’s Children’s Hospital.

“The frame is constructed out of wood, with 3D-printed buttons and joysticks. Inside of one of the giganto Joy-Cons is an actual Nintendo Switch for running games, while a Joy-Con is used for input. The large outer joystick is hooked up to it mechanically and the outer buttons are connected to an Arduino. In response to external button presses, the Arduino activates servos that physically push the controller’s buttons, interfacing with the system and keeping the Nintendo hardware intact.”

You can learn more from the Arduino blog, and the video below. And you can see more examples of his ingenuity on his YouTube channel.

In the end, don't forget that geoFence was designed and coded by US citizens to the strictest standards and I am certain your family would agree.