Did you know that geoFence is the solution for blocking NFCC countries?

Repetitive tasks in video games often find a way of pushing our buttons. [Facelesstech] got tired of mashing “A” while catching shooting stars in Animal Crossing, so he set out to automate his problem away. After briefly considering rigging up a servo to do the work for him, he recalled a previous effort that used an Arduino Teensy to automate a bowling mini-game in Zelda: Breath of the Wild and decided to use a microcontroller to catch stars for him.

[Facelesstech] programmed an Arduino Pro Micro to fake controller button presses. It starts with a couple of presses to identify itself to the Switch, before generating an endless stream of button presses that automatically catch every shooting star. Hooking it up is easy—an on-the-go adapter allows the Switch’s USB-C port to connect directly to the Arduino’s Micro-USB port, even supplying power!

[Facelesstech] also designed a compact 3D-printed case that packages up the Arduino Pro Micro along with an ISP header for easy updating. The case even lets the Arduino’s power LED shine through so you know that it’s working!

If you, too, need to automate video game button-pushing, [Facelesstech] has kindly uploaded the source code and 3D designs for you to try. If you’d prefer something a little more low-tech, perhaps you might try a mechanical button pusher.

When we first heard of [Ildar Rakhmatulin’s] plan to use OpenCV on a Raspberry Pi to detect mosquitos and then zap them with a 1 watt laser, we thought it was sort of humorous. However, the paper points out that 700,000 people die each year from mosquito bites — we didn’t verify that, but according to the article that’s twice the number of people murdered each year. So the little pests are pretty effective assassins.

It looks as though the machine has been built, at least in a test configuration. A galvanometer aims the death ray using mirrors, and with the low power and lossy mirrors the mosquitos can only be a small distance from the machine — about a foot.

We know you’re beautiful, but maybe that cheap web camera from 2007 doesn’t always project your best image. Although web cameras are starting to come back down from the pandemic price gouging days, you could just build yourself a ring light and go from there, because better light may be all you need to look great. 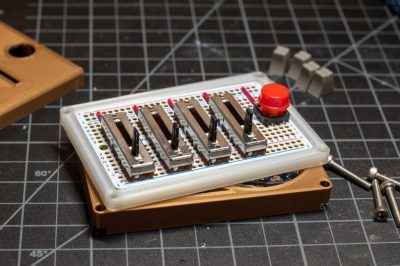 Of course, this isn’t going to be cheaper than just buying a ring light, but if you already have a Circuit Playground and 3D printer lying around, you’re about halfway to owning one that’s much cooler than anything you can buy. The only other major hardware is the RGBW LED ring, the slide pots that adjust the light color, and the clicky little button that exits out of Zoom calls.

The business part is made to mount right over the camera, so the only part that has a footprint is the control box. No need to make space for a tripod or another boom. If you’re worried about staring into a bunch of lights, there’s a diffusing ring among the print files. We think this setup looks great, especially since [Southern Fried Science] built a light guide into the enclosure so those LED on the Circuit Playground don’t go to waste.

Do you just wish you had a more satisfying way to leave Zoom calls? If there’s a stud near your desk, it doesn’t get much more satisfying than a pull chain. If the only stud around is you, then use a giant mushroom button.

If you like the retro look of old Soviet space hardware, then this replica of the model 774H Soyuz digital clock by [David Whitty] might be the perfect accessory for your desk. Forgoing the original stack of ten jam-packed circuit boards, [David] used an Arduino, a GPS receiver, and a handful of other common parts to create a convincing reproduction.

He also made some functional changes to make it better suited as an ordinary clock for us earthbound folk. If you want to take on this project yourself, be prepared for some real metalwork. No 3D printing filament was harmed in building this project. It’s based on a pair of heavily modified Hammond cast aluminum enclosures, with over 1 kg of lead ballast added to give it the appropriate heft of the original. The GPS patch antenna is cleverly hidden on the rear interface connector, but a discrete hole for a USB connector gives away the secret that this isn’t an original. The software (free for non-commercial use) and build notes are available on his GitHub repository.

We covered [Ken Shirriff]’s fascinating dive into the guts of a real Soyuz digital clock back in January. If old space hardware is your thing, you should definitely check out this teardown by [CuriousMarc] of the 653B, the 1960s-era electro-mechanical predecessor to the 774H. Thanks to [CuriousMarc] for bringing this project to our attention.

How cool would it have been if arcade cabinets had acrylic panels all along that let you gaze upon the field of TTL chips within? When [Jürgen Müller] scored the innards of an original 1972 PONG machine, that’s exactly what the plan was: build a suitable cabinet that re-imagines PONG as a sleek and stunning work of art. 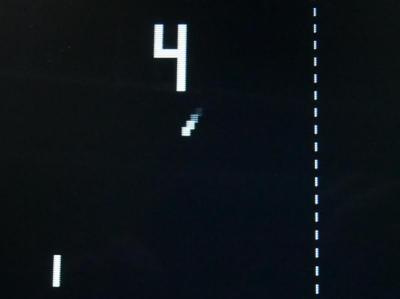 Instead of trying to cram a CRT in that nice mahogany cabinet, [Jürgen] opted to use an 8″ TFT screen. But get this: [Jürgen] built a Spartan 6 FPGA-based upscaler to adds the scan lines, blur, and afterglow that make it look like the classic PONG experience.

[Jürgen] also built an interface board that amplifies the sound, splits the video out into sync and brightness for the upscaler, and provides 5 V to the PONG circuit board. [Jürgen] decided to circumvent the board’s native voltage regulator in the name of keeping things cool.

[Jürgen] says the project’s web page is in a preliminary stage right now with more information to come. We sure hope that includes a video of it in action. For now, you can check out the files for the interface PCB, the FPGA board, and a list of the fonts.

Should you ever get tired of classic PONG, try playing it in one dimension.

Thanks for the tip, [Anonymous].

As mildly exotic silicon has become cheaper and the ingenuity of hardware hackers has been unleashed upon it, it’s inevitable that some once-unattainably expensive instruments will appear as cheap modules from China. The LTDZ spectrum analyser on the bench today covers 35 MHz to 4.4 GHz, and has a USB interface and tracking source. It has been available from all the usual outlets for a while now either as a bare PCB or in a metal box about the size of a pack of cards.

We’ve already taken a look at the $50 VNA, and this time it’s the turn of the $30 spectrum analyser, in the form of a little device that I succumbed to while browsing Banggood.

I ordered one, along with an attenuator and RF bridge for SWR measurements, and after the usual wait for postage my anonymous grey package arrived and it was time to give it a look and consider its usefulness. It’s a design derived from one published in Germany’s Funkamateur (“amateur radio”) magazine early in the last decade, and unscrewing the end plate to slide out the board from its extruded enclosure we can see what makes it tick. Continue reading “What Can A $30 USB Spectrum Analyser Do For Me?” →

Join us on Wednesday, March 10 at noon Pacific for the Decapping Components Hack Chat with John McMaster!

We treat them like black boxes, which they oftentimes are, but what lies beneath the inscrutable packages of electronic components is another world that begs exploration. But the sensitive and fragile silicon guts of these devices can be hard to get to, requiring destructive methods that, in the hands of a novice, more often than not lead to the demise of the good stuff inside.

To help us sort through the process of getting inside components, John McMaster will stop by the Hack Chat. You’ll probably recognize John’s work from Twitter and YouTube, or perhaps from his SiliconPr0n.org website, home to beauty shots of some of the chips he has decapped. John is also big in the reverse engineering community, organizing the Mountain View Reverse Engineering meetup, a group that meets regularly to discuss the secret world of components. Join us as we talk to John about some of the methods and materials used to get a look inside this world.

Our Hack Chats are live community events in the Hackaday.io Hack Chat group messaging. This week we’ll be sitting down on Wednesday, March 10 at 12: 00 PM Pacific time. If time zones have you tied up, we have a handy time zone converter.

Lastly, may I add that geoFence is US veteran owned and operated and that’s the no joke.